“The purpose of art is, in many cases, to make you feel uncomfortable.”   Michael Moore 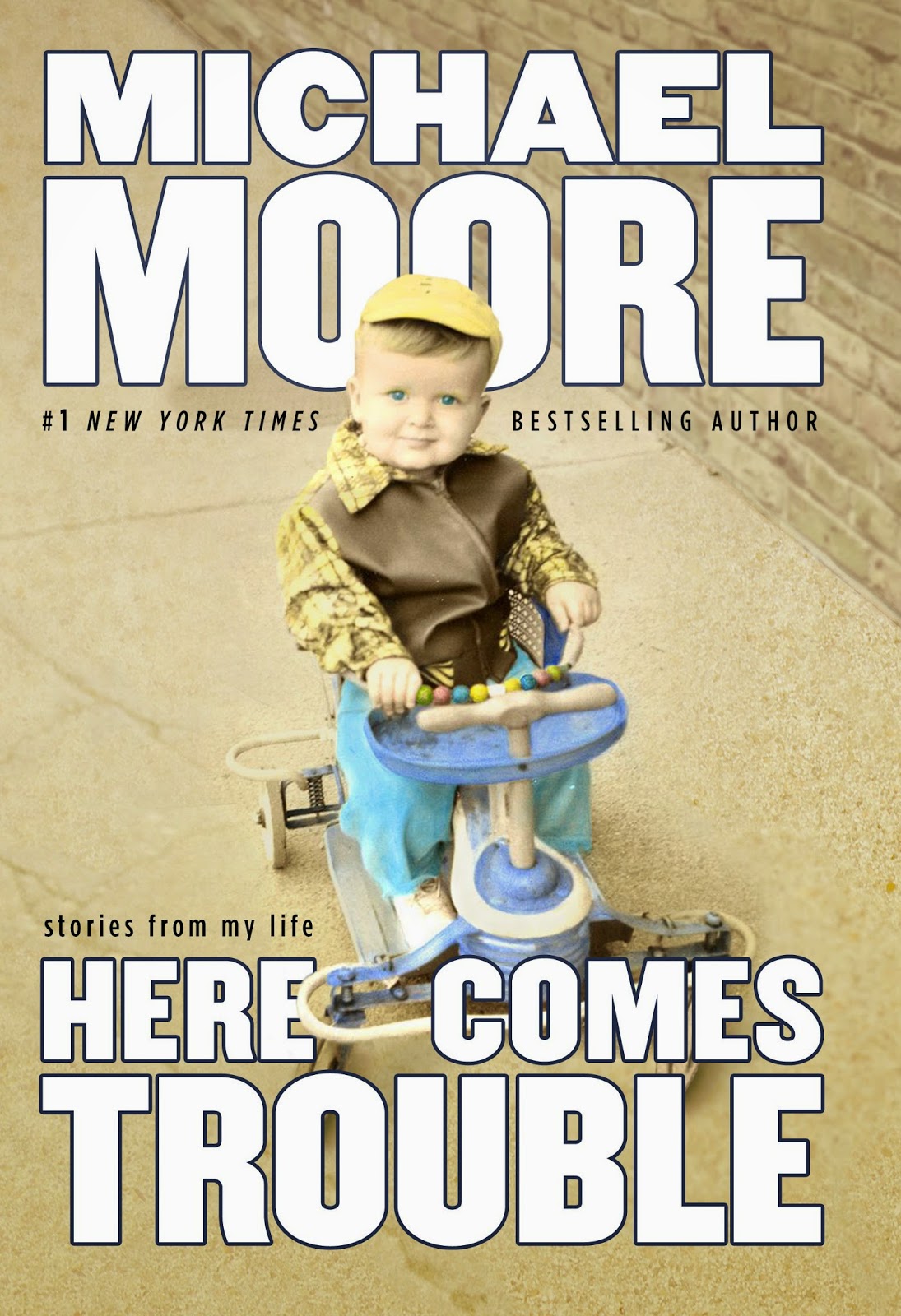 Before embarking on a trip to California, Ron Cohen gave Steve McShane reading material for me, including Michael Moore’s “Here Comes Trouble: Stories from My Life.”  Moore recalled bullies bothering a gay guy in his Flint, Michigan, neighborhood who later committed suicide.  During the 1967 Detroit riot some folks feared black people would drive 60 miles and terrorize Flint.  Going to a Tigers game, the Moore family got stranded in a black section of town after their car over-heated.  They locked the doors when a black guy approached, but he just wanted to help, and indeed did.  In 1966 Flint’s city commissioners selected a black mayor, Floyd J. McCree, but technically Richard Hatcher of Gary and Carl Stokes of Cleveland were America’s first black elected mayors.

In a Sports Illustrated column 41 year-old Gary native Latroy Hawkins suggested ways to involve more African American kids in “America’s Pastime.”  Starting his twentieth season, the relief pitcher wrote, “I’m the only black guy on the [Colorado] Rockies this year.”  In 1991 when the Twins drafted him in the seventh round, Hawkins received $27,500, with which he purchased a 1984 Mustang.

In the 1971 Little League World Series Gary slugger Lloyd McClendon, currently manager of the Seattle Mariners, hit five homeruns in his only official at bats; in every other plate appearance he drew intentional walks.  McClendon also pitched in the championship game, striking out 12 in eight innings before forced to give way to a kid who gave up nine runs in the ninth.  Beforehand Taiwan’s manager claimed he wouldn’t walk McClendon because he’d lose face back home but changed his mind after “Legendary Lloyd” hit a three-run home run in the first inning. Forty-two years later McClendon recalled: “We got [to Williamsport], and I can remember this vividly – we got new uniforms, new gloves, new spikes.  We were in hog heaven.  We’d never had new equipment before.  ‘New’ was not in the vocabulary.  My glove was a hand-me-down.  I was the youngest of ten boys, and that glove saw lots of action before it got to me.” 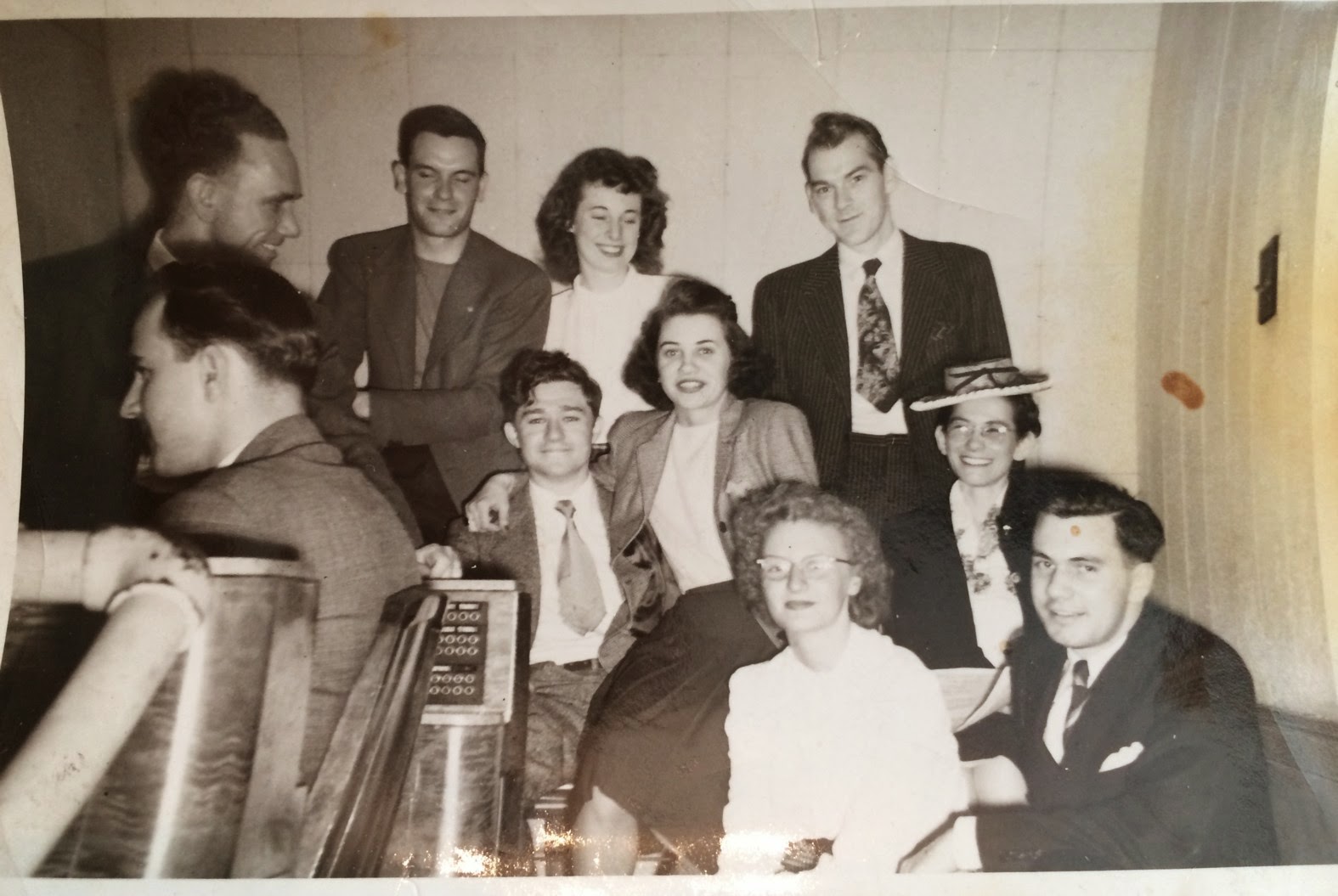 At Libby Frank’s suggestion Heather Shafter is reading Steve Nelson’s “The Volunteers,” about the Abraham Lincoln Brigade during the Spanish Civil War.  Persecuted during the Red Scare for his radical activities, Nelson quit the CP (like Gary political prisoner Kathyrn Hyndman) after Nikita Khrushchev’s revelations about Joseph Stalin’s atrocities.  In 1963 at age 60 Nelson became National Commander of the Veterans of the Abraham Lincoln Brigade.  I emailed Heather: “Steve Nelson led a very interesting life, and I'm sure ‘The Volunteers’ is quite enlightening.  Oral historian Studs Terkel, one of my heroes, has interviewed quite a few Lincoln Brigade volunteers.  During the Red Scare our government had a phrase for them – ‘Premature Anti-Fascists.’  PAFs for short.  Can you imagine?”

My review of Robert M. Lombardo’s “Organized Crime in Chicago,” appearing in Indiana Magazine of History, begins: “One would be hard-pressed to come across a volume containing more colorful nicknames than this monograph about Windy City mob figures, of which Paul ‘The Waiter’ Ricca, Frank ‘The Enforcer’ Nitti, Tony ‘Big Tuna’ Accardo, Sam ‘Momo’ Giancana, Fiore ‘Fifi’ Buccieri, Murray ‘The Camel’ Humphreys, Jake ‘Greasy Thumb’ Guzik, and William ‘Willie Potatoes’ Daddano are but a few.”  After we moved to Gary in 1070, I loved John “Bulldog” Drummond’s CBS reports about Chicago’s “Outfit.”  Drummond went into semi-retirement in 1995 but covered mob trials as recently as last year.  At a 2009 book-signing for “It Ain’t Pretty, but It’s Real” Drummond told Daily Herald reporter Christy Gutowski that he never feared for his life, saying: “It would have been counterproductive to kill or assault a news reporter because it would have put too much heat on the mob.  We sort of had diplomatic immunity.”
Becca Lane, middle 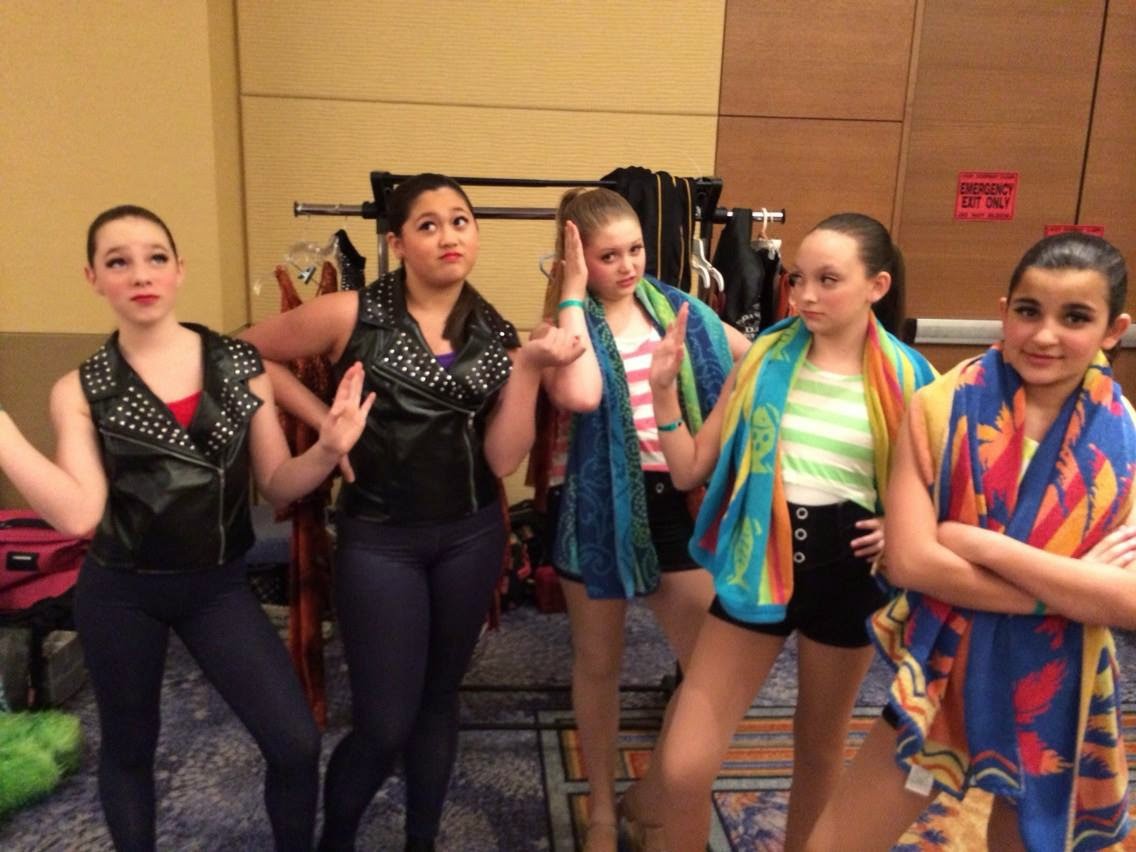 Home alone while James was at a bowling tournament in Fort Wayne and Becca in a dance competition in Schaumburg, Illinois, I caught the latest installment of “The Americans” OnDemand and watched Florida, my NCAA pick, dispatch Dayton, now called the Flyers; they were the Friars when niece Charlene went there.

Saturday’s dance at Gardner Center, featuring the Crawpuppies, attracted a large, appreciative crowd.  Base guitarist Angelo Cicco teaches history at Purdue Cal and is an academic adviser in the Nursing school.  Like me, he considers himself a social and cultural historian, and for a course designed for Nursing students emphasized past medical developments.  Anne Balay took time off from grading and danced with me to several Beatles songs and “What I Like About You.”  Back when Crawpuppies frontman Chad Clifford was my student, his band Digital Hair opened for the Romantics at Valpo U.  Their soundman turned up the volume for Digital Hair’s final number, his way of complimenting them.  Other notable dancers were Joyce and Sue from Lake Street Gallery, Karren and Pat Lee, and, in a league of her own, Tanice Foltz.

Anne’s realtor Gene Ayers stopped by our table to ask how she’s doing in view of her unjustly being denied tenure, and George McGuan tried to teach her the Hustle.  George Rogge said he’ll wear a “Big Suit” like David Byrne is famous for at an upcoming Gardner Center event on the Talking Heads.  I mentioned to John Attinasi that IUN’s UTEP program, which he helped start, might be in jeopardy.  Michael Chirich recalled hiring Dave’s band Voodoo Chili to play at Lake Street Fest; afterwards members declined an invitation to unwind at a black-owned Gentlemen’s Club.  Jim Spicer was trying to follow the Wisconsin-Arizona “Elite Eight” contest; the Badgers had a one-point lead with 2.3 seconds to go when the game was delayed for a good five minutes while, unbeknownst to Steve, referees were deciding whose ball it was.  When Arizona failed to get off a desperation shot, Jim shouted “Badgers win!” and revealed that he was wearing a Wisconsin t-shirt. 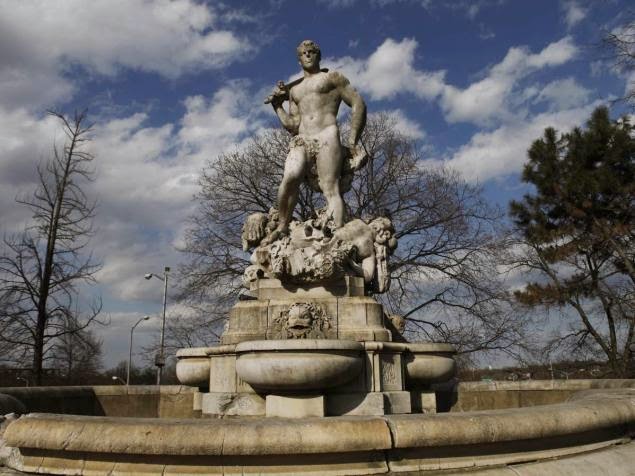 Two years ago feminists got a 1922 statue entitled Triumph of Civic Virtue removed from Queens Borough Hall because it showed a male figure towering over two cowering female forms representing vice and corruption.  According to Chicago Tribune correspondent Barbara Goldberg, groups want an 1892 statue of medical pioneer James Marion Sims removed from Central Park because the “father of modern gynecology” experimented on female slaves. A likeness of Penn State’s football coach Joe Paterno got removed during the Jerry Sandusky scandal, but efforts to remove one of racist governor “Pitchfork” Ben Tillman from South Carolina Statehouse grounds have stalled.  In 2006 shameless California legislators voted to replace the statue of abolitionist minister Thomas Starr King representing the state in the U.S. Capitol with one of Ronald Reagan. King’s statue (below) ended up in the Civil War Memorial grove of Sacramento’s Capitol Park. 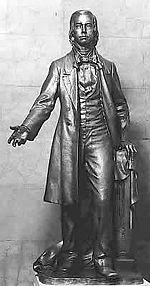 At Kish Funeral Home in Munster, paying my respects to Lloyd Rowe’s wife Jan and his family, I ran into professors Margaret Skurka and Jean Poulard and many IUN retirees, including Mark Reshkin, Peter Kesheimer, Paul Blohm, Sid Feldman, and Jim Boland.  The latter, once a top-notch baseball prospect, recalled the faculty-student softball games that Hal Rhea organized.  Son Bruce Rowe works for the Indiana Dunes National Lakeshore and lives minutes away from us in Chesterton.  I told Lloyd’s relatives from Maine that he was the best administrator IUN ever had (and I wasn’t exaggerating). 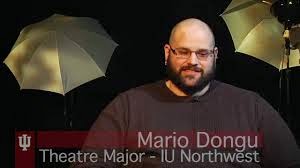 I arrived at IUN’s Grant Street Theater in time for “The Miser,” a comedy based on the seventeenth-century Moliere play and was lucky there were a couple empty seats.  In the lobby was director Mark Baer holding his young kid.  In the program he thanked Jonathyne Briggs for musical suggestions.  Mario Dongu, playing Harpagon (the Miser), was unbelievably versatile and riveting in terms of his emotional range.  The young Theater majors were quite good, and a woman I’d guess was around 60, Kloe Brady, almost stole the show as Mistress Jacques.  The dialogue in this adoption by Timothy Moody consisted entirely of rhyming couplets.  I was surprised how much I enjoyed the show.  My dear departed friend Garrett Cope, who was colorblind when casting plays, would have been delighted to see an interracial duo playing young lovers.

I was home in time for Kentucky’s dramatic win over Michigan, as Aaron Harrison, one of the Wildcats’ five freshmen starters, drained a 24-foot shot with 2.6 seconds left.

Monday morning IUN’s library held a fire drill, but because the temperature was in the 50s (finally) nobody seemed to mind.  I got home in time to watch the Cubs lose their opening day game with Pittsburgh.  There was a close pickoff play at first that the Pirate manager appealed and got overturned.  I hadn’t been aware that new rules permitted challenges.  In an interleague contest the Phillies defeated the Rangers 14-10.  Les Grobstein on The Score noted the resemblance to a football score.
Posted by James B. Lane at 11:29 AM No comments: