“If our generation could survive coming of age in the 1950s, we can survive anything.” Gloria Steinem, “Moving Beyond Words” 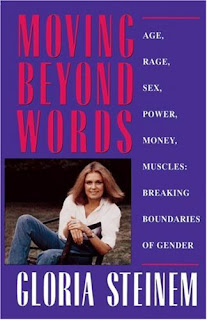 The implication of feminist Gloria Steinem’s survival quote is that she is referring to women although she believes that everyone needs to get beyond gender stereotypes.  That said, the 1950s was probably the best time ever for the American middle class, not only WASPs (White Anglo-Saxon Protestants) but other ethnic groups as well.  Progress is more probable, I believe, in times of prosperity, and America was riding high in the Fifties.  On the other hand, when geezers get too nostalgic for the Eisenhower “siesta” years, one must admit that survival was difficult for outspoken African Americans and gays who dared come out of the closet.
John Cho as Sulu 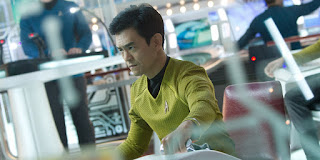 “Star Trek Beyond” had too many special effects and not enough story line for my taste, but I loved the opening scene where the Teenaxi, who look like little dog-monsters, attack Captain Kirk as he claims he has come to their world in peace.  After Scotty successfully beams him back to the Enterprise, a couple Teenaxi got beamed back, too.  Later we see that they have been successful assimilated into the Enterprise family. We first see Hikaru Sulu with a photo of his daughter; then when he reunites with her, she is with his husband.  Voila!  He’s gay – a tribute of sorts to George Takei, the original Sulu.  During the final credits was a transcendent (i.e., beyond words) visual panorama of the Milky Way. 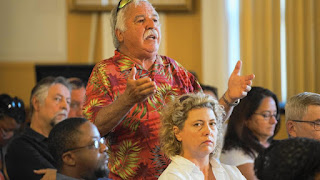 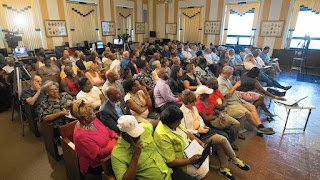 More than a hundred Gary residents packed city hall to hear Redevelopment director Joe Van Dyck defend a proposed agreement that would authorize Maia Company, a Chicago-based group that former mayor Richard Daley is a part of, to finance and profit from future projects to the tune of 65 percent compared to 35 percent for Gary.  Many feared it would result in the removal of poor people to make way for outsiders to make windfall profits on potentially valuable land.  Van Dyke admitted that current owners might lose their property if they were in tax arrears.  Retired IUN professor Ruth Needleman complained: “No one in this group is from Gary.  I don’t see anyone who is black or Latino.”  Nonetheless the Redevelopment Commission voted 4-0 to support what opponent Samuel A. Love called Daley Demolition. While Gary needs investors, the devil, as the expression goes, is in the details.

On 80/94 a car was weaving in and out of traffic at a speed of at least 80 miles an hour, tailgating slower vehicles in the way.  In “Speedboat” Renata Adler sums up the consequences of impatience with this anecdote:
Somebody was nudging my tray along the rail at the museum cafeteria.  I was trying to keep my tray from bumping the tray ahead.  I held my fingers firmly on the tray top, hooked my thumbs underneath the steel bar.  The pressure of the nudging tray increased.  I gave in to the superior determination.  Doubtless, the tray pusher had had an awful day.  I let go.  My tray slid into the next tray, which slid into the next, which crashed into another.  At the cashier’s corner, there was a pileup.  Tea bags, jelly, trays all over everything. 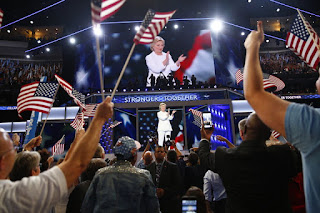 Memorable lines from the Democratic convention: retired Rear Admiral John Hutson saying, “Donald, you’re not fit to polish John McCain’s boots” and Mayor Michael Bloomberg declaring, “I’m a New Yorker, and I know a con when I see one.”  Folksy Bill Clinton was very moving describing his love and admiration for Hillary, although MSNBC’s Rachel Maddow took issue with the line, “In the spring of 1971 I met a girl” – a case, methinks, of taking political correctness too far.

Ray Smock wrote:
The final night of the Democratic Convention was as good as these things get. The emotional and intellectual highpoint for me was when Mr. Khizr Khan, the father of an American soldier killed in action, held up the Constitution and challenged Trump to read it. He made the profound observation that while many have sacrificed for this country Trump has sacrificed nothing.

Arguing that the lunatic fringe had taken over the Republican Party, conservative New York Times columnist David Brooks wrote: “This week I left the arena each night burning with indignation at Mike Pence. I almost don’t blame Trump. He is a morally untethered, spiritually vacuous man who appears haunted by multiple personality disorders. It is the “sane” and “reasonable” Republicans who deserve the shame — the ones who stood silently by, or worse, while Donald Trump gave away their party’s sacred inheritance.”

At IUN’s Thrill of the grill I sat down next to a young woman and asked whether she was an incoming freshman.  Her dad asked why I didn’t put the same question to him, and I replied that I’d had students older than him.  Charles Costo and Jesse Villalpando came to mind, both of whom became teachers well into their fifties.  From a P.A. came the sounds of Marvin Gaye singing “Sexual Healing.”  Sadly there is no live music this summer like in the past. Shortly after lunch a severe thunderstorm kept several groups of incoming students in the library lobby.  The parking lot south of Cedar Hall was a veritable lake.  My sneakers and socks got drenched, and I was thankful the car started. 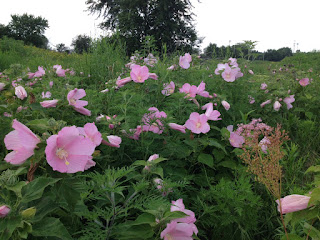 Spencer Cortwright reports: “There are two species of Wild Hibiscus native to Indiana.  Each likes muddy soils or even shallow water.  One Species is pinkish/white (below); the other species is deep red. These two species are abundant in the preserve north of campus, but are kind of hard to see because they are in low-lying damp areas.  But if you walk along the top of the levee, then you will have a perfect view!”

Interviewed by Clara Bingham, Peter Coyote of the Diggers concluded that radicals lost the political battles of the Sixties but won the cultural wars.  Former Weather Underground leader Bill Ayes admitted he made mistakes but that they were inconsequential compared to henry Kissinger who, he claimed, killed 3 million people, or John McCain, who bombed civilians, or John Kerry, who “slit the throats of two elderly people on the outskirts of a village because he was leading a group of Navy SEALs into a Viet Cong-held village and had to quiet them.”  Ayers added, “But a blanket apology is just too much.  And it is insincere.  The Days of Rage?  Not sorry.  The Pentagon? (where the Weather Underground exploded a bomb in a bathroom, causing major damage)  Not sorry.” 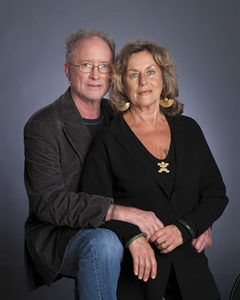