“Puberty for a girl is like floating down a broadening river into an open sea.” Psychologist Granville Stanley Hall

Unlike the phrase “Sold down the river,” which originated two centuries ago when troublesome slaves were transferred to plantations in the Deep South where conditions were truly horrific, Marcella Portman Cutter employed the title “Down the River and Thru the Gap” to highlight how her life broadened after she finished high school and boarded a train to Chicago. Marcella sent me a sample of the manuscript after I gave her son Kevin a copy of the Steel Shavings volume “Age of Anxiety,” which contains recollections of celebrating V-E Day in Chicago at age 15 and riding the Ferris wheel at Riverview Amusement Park to impress a date the following year, much to her regret.  Her cover letter stated: “I am now 87 years old and about 25 years ago started writing my family history.  I will never finish my book but have put together several three-ring binders for family members.”  Hopefully I can obtain a copy for the Archives because what she sent along is in this social historian’s opinion, solid gold.  Here are excerpts:
Late in October of 1939, the Portman family arrived in Whiting from Kentucky, and Aunt Kate took Tunstall Barton me to a Halloween bonfire.  I attended fourth grade at McGregor Elementary and then South Side Elementary, both in Whiting. We lived with Uncle Otha and Aunt Kate on Schrade Avenue, then moved to the old Standard Hotel (now the location of a War Memorial).  We lived on a third-floor front apartment.  On a clear day, I could see Lake Michigan from the bay window.
For the most part, I was just another poor little girl from the South.  In grade school I was asked to collect Red Cross money each week from classmates.  After a few weeks, without any explanation, the job was given to another student.  I just assumed it was to afford another student the opportunity.  It wasn’t until later, when a teacher apologized for suspecting me of stealing money, that I realized the reason for my removal from the job.
December 7, 1941, was a turning point in everyone’s life.  I remember returning home from the movies and hearing the news of Pearl Harbor on the radio. From time to time, my mother would send ration stamps to my grandmother Tunstall in Kentucky.  Since she canned fruits and made jellies, she used more sugar than our family. At the end of ninth grade, we had a dress-up dance.  Of course, the boys stood on one side of the gym and the girls on the other, too shy and lacking in social graces to mingle.
During the summer of 1944, I worked as a waitress at Brothers Restaurant in East Chicago. I told them I was 17 when in fact I was just 14 years old.  But it was wartime, and most women were working in war plants making big bucks, so they didn’t question my age. 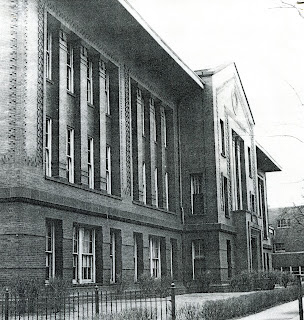 All through high school I worked at Gambini’s, the local teen hangout and malt shop full-time during summers and part-time during school months. Ma and Pa Gambini and their two sons, Harry and Tom, owned the business.  Harry Gambini was in the navy and his wife Jean helped run the restaurant.  There was a jukebox, and Jean made sure “It’s Been a Long, Long Time” by Kitty Kalleen and the Harry James Orchestra was among the turntable selections. It was about someone welcoming home a spouse or lover at war’s end.  Jean was a role model, everything I wanted to be – attractive, intelligent, well-educated, and self-assured.  She was the only female I knew who drove a car.  Expert at sewing, she once made yellow flowered wrap-around uniforms for us with yellow aprons.  The best part was that, unlike rental company uniforms, they really fit.  Jean sewed curtains and drapes for her apartment and even made automobile seat covers.  That lady, it seemed, could do anything.
My first job after graduating from high school in 1948 was a clerical position at First Savings and Loan in Chicago. Others would follow. 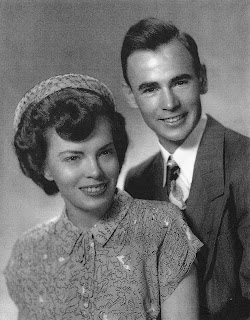 Marcella and Paul Clutter, August 19, 1950
In 1950 the Korean War began.  Paul Clutter, whom I had been dating since high school, was subject to the draft.  To marry or not to marry?  Did I want to be a war bride and risk having Paul killed or captured?  In August, with the Hammonddraft board breathing down his back, we decided to get married. All the blood work was done, and then I changed my mind.  Finally, the weekend before the draft board deadline I changed my mind again, and we purchased two gold rings at Peacock’s Jewelers in Chicago. We got married by a justice of the peace in Crown Point but didn’t make it back to Hammond by noon, so Paul was drafted and eventually was stationed in Germany.  While he was overseas I worked at American Steel’s Cast Armor Plant and, after the war, at American Steel Foundries in East Chicago for close to 15 years, until 1964, when I became pregnant with Kevin.
. . . .


After 30 years of steady employment at Youngstown Steel Door, my husband Paul Clutter found himself unemployed at age 50.  We found out about the plant closing in the Sunday paper.  Paul was finally hired at Pullman Amtrak but after six years came another long stretch of unemployment.  I had been working part-time as a school librarian and decided to return to work full-time.  I became secretary to two assistant principals at Hammond Gavit until my retirement in December 2000 at age 70. 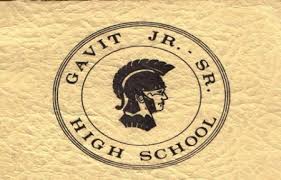 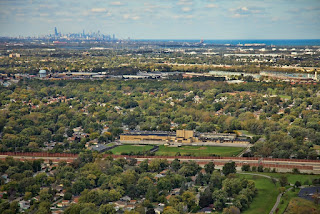